A group of men in military uniform were walking through the empty streets of Augesbury, capital of the county of Norfolk. At this early hour none of the usual artisans had opened their stores, so it was clear that something was brewing in the city.

One of the men, in a fancy armor and a long red coat, walked in the middle of the group. It was Titus Myksos, Dutch of Kildare and Prince of Aryasht. The five men around him were clearly elite soldiers with a bayonet in their hand. They looked around them like they expected to be attacked very soon. The man in the long, red coat, however seemed extremely happy and waddled more than he walked straight. Titus had sobered up since a few hours ago but still couldn’t think very straight.

He remembered that he come to Norfolk after he had received news that the Shirerithian government had dared to send troops to his territory, even if it was ‘just’ Aryasht. Enraged he had taken the first ship and only a handful of soldiers to demand the retreat of the Apollonian Guard. The commander of the Guard had welcomed him that evening and had invited him for dinner.
Attempts had been made to solve the matter, but after long discussions and a lot of wine, Titus’ anger had taken the best of him and – in the presence of more than twenty guests – he had declared Kildare independent from the joke that was called ‘Shireroth’. After this he had left the little party which had been given in his honor, while the commander was left behind in shock. Since then Titus had wandered through the city, trying to find some pubs to ventilate his anger.

The group suddenly came to a halt. In front of them, in the middle of the road, stood a person in a dark coat. His (or her) face couldn’t be seen, but in a fraction of a second he revealed a weapon and shot towards Titus.

The Dutch’ eyes became wider as he felt the impact of the bullet, which went right through his armor, and he collapsed on the ground. Everything became dark in front of his eyes. An eternal darkness?

The Dutch and Prince of the East seemed dead. This would not stay without consequences. 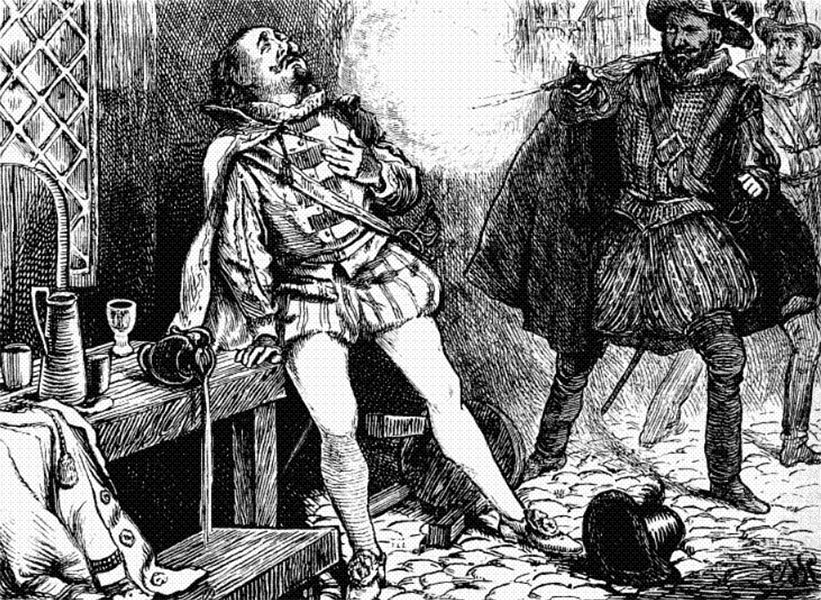 The guards were shocked and looked to the man who was their one and only leader. It had taken only a few more seconds for them to overpower the attacker, but it seemed too late.

"Wait! He's still alive!" shouted one of the guards to the others, who had now gone pale of worries. "Seems that even his worthless armour was enough to stop the bullet."

"Tss, such a wimp... fainting from just one bullet." whispered one of the men, while the others carried their Dutch to his hotel room.

As Minister Mordechai Kraut learned that his attempt to murder the Dutch had failed and the rebellion against the glorious Kaiser Redquill continued he ordered his soldiers to find out where the Dutch had gone into hiding. They found the hotel he was staying and and quietly took their positions. Several riflemen were equipped with non-lethal mortars, which cause extreme sleepiness. Mordechai joined his soldiers and ordered the mortars to be fired. Blue smoke rose from the hotel and even the crickets in the lawns stopped chirping but started to dream about decaying plant material.

"Are they all asleep now?" Mordechai asked. An officer nodded. "Collect all who reside in the hotel and place them in a row in the lawns."

The soldiers stormed the hotel and collected over a hundred people from the hotel, including women and children.

"Minister! I misheard you, surely you would not order us to do that after we used these new non-lethal weapons."

"Oh, it is nice to know that they work, but who fears an army that lets you sleep peacefully? If we do not slaughter the Kildari like cattle for their disobedience, tomorrow the Elw will raise in rebellion. They will make us look ridiculous."

"Good." Minister Kraut looked around. "Get your knives boys!"

Mordechai Kraut found the body of Titus Myksos, held the head of the sleeping man by his hairs and let his knife touch the Dutch's neck. The knife was sharp and blood started to pour out of the Dutch's neck.

"Please send a telegram to Zir Niftiness, inform him the rebellion in Kildare is over."
Light of Heavens
Top

Again, your initiative is noted, Minister. I would, however, like to say that the assassination of the head of a Shirerothian State is something which could likely have been avoided had proper negotiations been held. I'm sorry that the uprising ended in this way and hope that it should not happen again.
Kaiser of the Imperial Republic of Shireroth
Duke of the Duchy of Goldshire
Count of the Suthergoldian Countship

Kaiser Redquill wrote:Again, your initiative is noted, Minister. I would, however, like to say that the assassination of the head of a Shirerothian State is something which could likely have been avoided had proper negotiations been held. I'm sorry that the uprising ended in this way and hope that it should not happen again.

Let's not add insult to injury.
Kaiser of the Imperial Republic of Shireroth
Duke of the Duchy of Goldshire
Count of the Suthergoldian Countship

Kaiser Redquill wrote:Again, your initiative is noted, Minister. I would, however, like to say that the assassination of the head of a Shirerothian State is something which could likely have been avoided had proper negotiations been held. I'm sorry that the uprising ended in this way and hope that it should not happen again.

OOC: To be honest, I consider this one of your more clever responses.

It was dark night, Marcus his family had long since departed to bed and only him his steward, a few councilmen and a few members of staff remained in the throne room of the keep to discuss matters of state. Marcus was just about to take a sip of his wine as a messenger busted trough the door.
Messenger: Lord Myksos I have urgent news from Norfolk, sir.

“Very well approach and give me the letter.” The count said as he motioned the messenger to approach

Marcus sighed thinking it would be another boring message about dangerous vegetables or some nonsense like that. As he read the letter his eyes widened.

All people that were in the room tried to make some distance between the lord and themselves.

Marcus continued in his calm tone “I would appreciate it if you all left the room for a moment.”

As if the devil himself was chasing them they hurried out of the room fearing the reaction that Markus would have over the cowardly murder of his own brother.

And then it started


It took several hours before the screaming stopped and several more before someone dared to go near the throne room again.

Eventually the steward entered the room. “Sir do you have any commands?”

he said nervously as he looked upon Markus sitting in the smouldering ruins of what was once his throne room, tables smashed to bits, chairs broken, paintings slashed even the throne, a 1000 year old heirloom had been pierced by Markus his blade.

Allow me to express my sincerest condolences for your immense loss, one can hardly imagine. In any case, should you ever wish to address an issue then you need only ask for an audience.
Kaiser of the Imperial Republic of Shireroth
Duke of the Duchy of Goldshire
Count of the Suthergoldian Countship

“Troublesome news reached us from Augesbury in Norfolk concerning the death of our beloved Ruler, Titus Myksos, after his declaration of independence.” The sound of the radio echoed through the room, while more and more officers of the Kildarian Protection Army gathered around it with worried faces.

“High-placed members of the Kildarian administration have announced that they are certain that the murder happened on the order of Shirerithian authorities who believed that our Ruler was a threat to stability and unity of the realm. They also announced that counter-measures will be taken to avenge…”

“Cursed be Cato!” mumbled one of the officers. “Your uncle is dead, sir Trajan. What will happen now?”

Trajan Myksos, nephew of Titus looked to the men and women who he could call his friends and told them: “The Throne is free. And while both my uncle Marcus and I have some right on it, there is no successor appointed. This is a first since Taodosius established the Myksos dynasty as the only ruling family and exterminated most other ducal dynasties during the wars against the Garllici."

For a moment he seemed to sink into thoughts. Everyone who was present knew that he had a good relationship with his uncle, who throughout the years had secretly delivered new military uniforms which would protect the soldiers better but weren't as old-fashioned looking as the Dutches demanded. All was payed with the money he received from the gold mines in Dalmacija, which were part of Trajans father patrimony. He knew that Marcus didn't seek power for himself and would only want revenge.

"Both of us don't really seek the Throne. We want revenge for the death of our family member. Our honour demands it, not only as family but as Kildari! Next to that, we have to respect the declaration of independence, even if it was done during a dinner!”

Now the officers looked even more worried than before.

“But, dear friends, this situation could be a positive one. We could end this era of feudalism once and for all. We can take what should belong to us and guide Kildare – no, the whole of Apollonia – into a new era!”

“That sounds good, but how are we going to do this? Are you claiming the Throne, Trajan, even if you just said that you have no real interest?” asked one of the older, more critical officer.

“Hhmm. No. I don’t want to take a position which I haven’t earned. No, we will do it our way… the new way… the - how do I say it properly? – Apollonian way. Gather the men, it’s time for a trip to Apollo City! It's time to end the monarchy.”

With this, the officers saluted and left the room. Only Mil Severus of the Xth Legion had stayed behind.

“Friend, this is an enormous bet you’re making now. It’s true that you have the support of at least seven border legions, but you’re not only making an enemy of those damn royalists… and who knows what the people will do?”

Trajan grinned. “The people will do what we want, if we play our cards right. Now leave me alone. There’s a lot to do.”

Now Trajan was all alone, looking to a map of Kildare with the positions of the legions. “We will act fast. We need to, to save Kildare from further oppression from both the inside as the outside.”

With that he opened his bag and took out a little book with the name ‘Prayers and stories of the True Catologian Faith’ and threw it in the fire.

“We will destroy everything which is in our way and reshape the lands as they should be…” he repeated to himself.