The Kingdom of Ziegeland, the ancient, Inner Lands of Yellow Island. 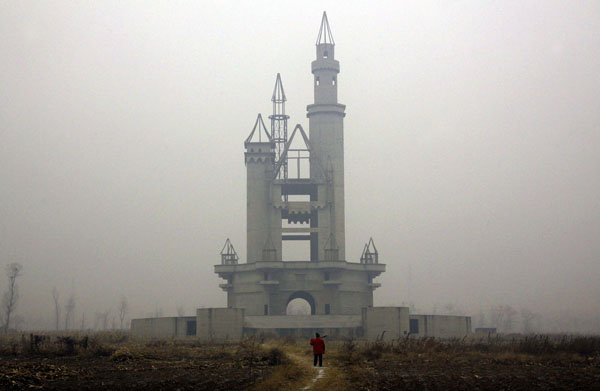 Unfinished reconstruction of The Heim, the Draconian fortress that resisted Nett Opaegh's siege.

Dracoheim had been decreed rebuilt some quarter-century ago by King Nathan as a gesture of reconciliation with the Draconians. It was intended to revitalize the spirit of the Draconians and demonstrate the Mehl's benevolence. King Nathan hoped the rebuilt Dracoheim would become equal parts historical tourist trap and an end to the Draconian diaspora. In fact it only hastened the near total emigration of Draconians from Natopian lands.

Empire Library led a research team into the ruins and found many interesting and exciting artifacts. These suggested that the Draconian civilization was much more sophisticated than the Mehl at that time. The Library's findings, suggest to this author, that the Mehl were only successful in conquering Yellow Island due to Nett Opaegh's knowledge of ancient, albeit advanced, Jasonian technology. Had the foreign invader, Nett Opaegh, not arrived on Yellow Island and crushed its native populations we may very well be living as descendants of the Draconian tradition. One of the biggest "What Ifs" in Natopian history indeed.

The rebuilding of Dracoheim was to be done primarily by Draconian workers, in an effort to keep the new city as purely Draconian as possible. Tanár Fee'ser, already old when he was appointed General Overseer lost his sight and most of his hearing and was manipulated by the Mehl contractors. Working conditions deteriorated as Mehl overseers, unwilling to let go of prejudices, enforced unsafe conditions upon the Draconians.

Construction slowed to a crawl. This explains the discrepancy between the official MCS map of Flaventia and the map of Flaventia published by the demesne. The demesne optimistically classifies Dracoheim as a real city, while the wider world still sees it as it is, a half-finished project, now crumbling itself next to the original Draconian ruins.

Under appalling work conditions, the Draconians fled Yellow Island yet again. Now most of the remaining Draconian population lives in southern Klaasiya. A growing population also now live in Shireroth, having emigrated when the Draconian Ludwig Drakire became kaiser and now settled in Goldshire under Draconian duchess Kizzy Drakland. I have visited kinfolk in Goldshire and the Draconians there enjoy a high quality of life, perhaps higher than they ever received here in Flaventia.

The Dracoheim project has been quietly swept under the rug, seemingly as dead as the man who began the project. Will our new king, already too busy attending to our outer neighbors, ever bother to finish what his father started? If Dracoheim is ever to be rebuilt, it would not only be a marvel of Natopia, but quite possibly the world. Somehow I doubt we will ever see it come to fruition while our king wears too many crowns.

Perhaps the old adage, Hic steterat Dracoheim gloriosa uicti, is still true today and the Flaventian government fears rebuilding Dracoheim as leaving it in ruins is a more threatening deterrent than rebuilding it as a sign of progress.

Fins Dreeko is a weekly columnist for The Daily Goat specializing in government accountability and transparency. He is a member of the International Congress of the Draconian Diaspora.