Report from the Lord Protector

It came from Fort Ermingander. Mondo things will happen. Be afraid.

Report from the Lord Protector

My Brother Sovereign of the Tumultuous Wastes,

Pray be advised that I am in receipt of your request to offer a candid and unexpurgated account of my initial findings upon assumption of the Northbloom Protectorate, and find no objection to its fulfilment despite my work having escaped the remit of the Directorate of the Tumultuous Wastes. I remain indebted to you, my Brother Sovereign, for providing in deepest Council an account of my conduct as Chief Emissary during the Naomiai Affair of sufficiently exonerative grace that I was spared the ignoble fate of Emissary Lymiron, his entire office and some two-thirds of my own secretarial and protocol cadres. Measured against the welcome suspension of my reassignment to the Agister of the Litovine Forest as a Tee-al pheromone lure, be assured that the trouble of addressing your venerable personage with a little background information is as nothing in repayment.

Be that as it may, I must report that my assignment to Fort Ermingander in company with the lead elements of the Kalgachi Defence Force occurred somewhat more quickly than I anticipated, and has entailed a level of privation to which I am admittedly unaccustomed. Indeed I have not had such abrupt cause to question my bodily integrity since the day my chauffeur took a wrong turn in Shirekeep and drove my flagged limousine straight past the N&H party headquarters. Ironic, then, that my dismissal of him to Oktavyan for nine millimetres of the Prefects' caution appears to have helped earn the favour of my Brother Sovereigns in Council and inspire my current posting by way of reward. Thus grows the Garden.

To the matter at hand, then. May it interest your sovereign personage to learn that the recent migration of Kalgachi sentiment from "Who the crap is Mondo?" to "Where the crap is Mondo?" is mirrored to a great degree in the Northbloom population themselves. Having received and visited several of their number, I can confirm that these people are largely as we suspect: descendants of the subjects of the late Princess Octavia Rossheim of Highbloom, scarcely discernable from the more rural inhabitants of Katarsis in their physical appearance and cheerful disposition, albeit of far more modest means. Their total number is, however, low in proportion to the landmass of the Protectorate and they have suffered in recent years from incursions by voortrekkers of a racial-supremacist disposition. A small minority of the latter have refused to heed the renunciation of territorial claim upon the region by the United Batavian States and insist upon clinging to their tenuous settlements, coming frequently to blows with the Minarborian-descended population with whom they have refused to integrate or even negotiate. The operational policy of the KDF toward these groups after so many refused oppurtunities to return to their Batavian homeland, their armed hostility and the priorities of the logistical situation, tends toward liquidation and I have made it clear to the General Staff of the Garden that such measures shall meet with no objection from my office.

It is an office in name only, you understand - little more than a hand-dug granary about a kilometre from Fort Ermingander itself. Aside from a single chamber requisitioned by my staff, the granary continues to stockpile hunted and gathered food for the local population along with the produce of a few livestock pens and arable smallholdings. I have no intention of disrupting this fragile civilisational anchorage any more than I must - Government House is presently under construction opposite Fort Ermingander's gates by contractors from the Kalgachi National Timber Complex and I eagerly await relocation to this marginally better-appointed domicile.

Of Mondo himself there remains no sign, although the local people continue to profess an almost fanatical devotion to him and his works. I have not, as yet, found any witnesses to the fate of Emissary Knotty aside from a few who watched his initial arrival from afar. Indeed their overwhelming preoccupation seems to be the loss of the "viewscreens" - a series of large audio-visual devices which, I am told, were periodically hauled out of the fort on wagons by Mondo's necromechanical minions for the information and entertainment of the population. It appears that most of Mondo's communication with the people was through these contraptions, said to be of his own design, whilst he remained within the safety of the fort. My questions about the content of Mondo's local broadcasts have been met with tales of a wide, one might say implausible variety of programming integrated with certain subliminal and psychotronic effects of both a sonic and electromagnetic nature. His last broadcast allegedly explained that he was "having some guests for a picnic" and may be indisposed for a while, betraying no further clue of his subsequent condition or intentions except for an inexplicable but devastatingly-effective 'brown note' played at the broadcast's conclusion.

The memetic virulence of Mondo's televisual output, along with tales of a seperate psychotronic weapon which has supposedly kept incoming voortrekkers away from Fort Ermingander's immediate vicinity, has made the people deathly afraid of trying to enter the fort. Stories exist of the occasional reckless adolescent who succeeded in traversing its moat and walls to gain entry, but never returned. Adherence to this cautionary approach by my own officials and the KDF has been impeccably observed in accordance with the will of my Brother Sovereigns in Council - the fort's interior remains unviolated. The ceremonial KDF guard recently installed at its gates is a bizarre spectacle that I find unpalatably touristic in this most untouristic of places, but it has nonetheless proven popular with the locals who congregate to watch the sentries change at intervals throughout the day. I rather suspect the KDF intelligence staff have a closer ear to the desires of the population than I, if only because of their longer presence in the area and their incorrigible reticence in sharing information with my office. I do wonder if they distrust me as a remnant of the ancien regime at the DTW - if it pleases you to extend the means of your effuse charity, my Brother Sovereign, perhaps the matter can be raised in Council?

With regard to the attitude of the Northbloom population toward our presence, our arrival as "unexpected friends" has caused tensions in places - particularly in the environs of Fort Ermingander itself - but the majority of the population appear cautiously appreciative of our undertaking to uphold the will of Mondo and swat away the last voortrekkers who arrived in the region with no such intention. It is also acknowledged with some jollity that we have allowed local armed elements to retain their weapons for the maintenance public order on our behalf, in such a manner as they see fit. In return, many of them have assisted KDF forces in search-and-destroy missions against voortrekker encampments and the General Staff are requesting that I formalise them into a Protectorate militia of some kind, to avert the old 'Laqi Timebomb' of armed multitudes exposed to boredom and also to allow some KDF units to return to garrison. It appears I shall have no choice but to implement this advice in the long term.

More than anything, though, the revelation that we are willing to provide the Northbloom population with replacement televisions of Kalgachi manufacture has inspired such raucous enthusiasm that one might be forgiven for wondering if that gesture alone might buy their assent. Whether they will consider Kalgachi television output of equal merit to their fondly-remembered 'Mondovision' remains to be seen, although I have petitioned the DEO to establish a special broadcast channel for their consumption.

In addition my office is now producing printed outreach - I enclose a modest sample with this missive. 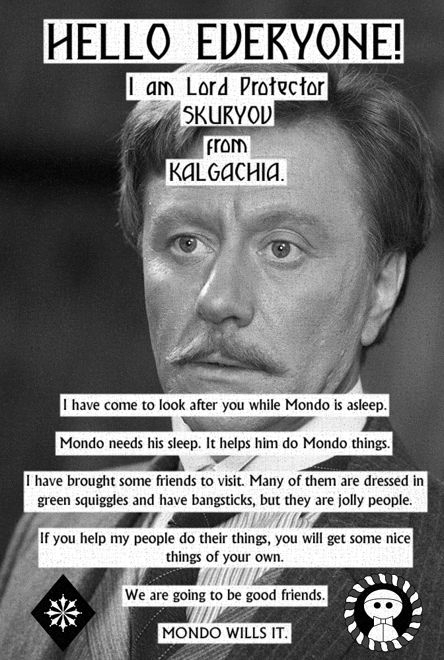 Be assured that further observations shall be forthcoming as warranted and the old Directorate shall remain in my confidence. A seperate, exhaustive report shall presently follow for the more collective edification of my Brother Sovereigns in Council.