Spyridon Vlahos, Ambassador Extraordinary and Plenipotentiary of the Imperial Constancian Embassy, in full Constancian Court Dress, went out of his way to personally present the following communication, after having supervised the rather nasty business of repatriating the Modani into, and thereafter, out of the embassy: 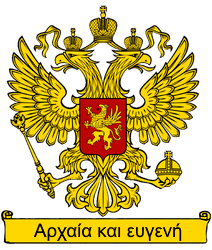 
The Imperial Constancian Embassy presents its compliments to the Ministry of the Exterior and has the honor to invite their attention to the following missive from the Autokrator of Constancia.

The Imperial Constancian Embassy avails itself of the opportunity of assuring the Ministry of its highest consideration.

The Imperial State of Constancia


Unto the Minister of the Exterior does the Autokrator of Constancia, in the name of His Imperial Majesty the Basileus, Petros III, send high greetings.

I have the distinct honor to be commanded by His Imperial Majesty the Basileus, Petros III, to advise the Government of the Imperial Republic, that we have, as part of our long-standing diplomatic friendship, delicately taken care of a rather pernicious thorn in the Kaiser's side, in light of the Kaiser's loss of confidence in the Consensus of Government in Modan, as well as recent internal political shifts and machinationsin the Imperial Republic. We regret the inevitable collapse of the Modani government, but trust that the Kaiser shall be pleased at the result. They shall not bother the Kaiser ever again.

In accordance with our treaty, specifically Articles II to VI thereof, we have the honor to report the appointment of the following individuals to the following positions under our Embassy:


We have the honor to remain loyal friends to the Kaiser and the Kaiser's Government, and endeavor to ensure the Kaiser's happiness.

I have the privilege to convey my assurances of the highest consideration to Your Excellency.

Molivadia Princeps
Knight of the Order of the Griffin
Autokrator of Constancia.

Return to “Embassy of Constancia”