The Confederacy of the Coast, colloquially known as Coastalis, is a collection of maritime city-states centered around the ancient pirate haven of Lighthouse.
Post Reply
10 posts • Page 1 of 1

The ancient city of Caldera, built along the outskirts of an ancient massive volcano long thought to be extinct, aptly lived up to its name when it erupted early in the morning hours. The Caldera volcano is considered one of the largest on Micras, but was thought to be extinct. But due to its size it misled scientists, as it was active after all, simply much deeper than other active (yet simmering) volcanoes. As the Brettish Isles are volcanic in nature, Caldera is also connected to several other volcanoes scattered throughout the islands. The surprise explosion of Caldera triggered a chain reaction among the other volcanoes, destabilizing the soil strata due to vibrations triggered by the explosion and successive land shifts. This resulted in a quick series of explosions across the Brettish Isles, effectively destroying the country in one fell blow.

While there have been isolated reports of survivors on the very utmost outskirts of the isles, the end result has been total destruction of the Brettish nation on a scale of monumental proportions. So sudden were the explosions that there was little time for anyone to seek safety. Due to its close proximity to Caldera, Westminster was almost immediately buried in ash, killing the entire royal family except for Princess Alexis, who had been vacationing in the Skerries. The entire government was also lost as a result. But of an even more epic tragedy was the loss of the Brettish people - millions were suffocated under ash clouds, or killed by the explosions themselves. Molten lava burned its way across the landscape, wiping away centuries of civilization. No corner of the isles were spared, and the ash cloud itself has extended for some hundred miles in radius around the islands. As a maritime nation, those who were in ships fled as quickly as possible. Many were overtaken by the advancing wall of ash, but still much of the Brettish fleet has survived with its crews. They are milling about on the open seas, seeking temporary refuge in the nearest safe port.

From the ancient city of Lighthouse, Princess Alexis (now Queen Alexis) convened an emergency session of the government and has urged all Brettish nationals and vessels to make for the Skerries where they can obtain safe port and reconvene. Here they can obtain food and shelter while the Princess tries to make order of what remains of the Brettish people. An alternate stopover exists at Port Goose, which due to its diminutive size can only serve as a refueling station. Until the volcanoes abate in the isles, rescue operations cannot commence, and the true death toll tallied; but officials speculate they will find few, if any, survivors. The isles themselves, buried in ash, will not be habitable either, making the Skerries the most probable place to re-settle refugees. Right now, however, too much chaos ensues for any sort of direction to be clear. With the reigns of the nation firmly handed to the young princess, she will need all the help she can get to ensure the survival of her people.


(Writer's Note: This precipitates me scaling back the Brettish Isles into a much smaller project (Coastalis). Foreign aid is welcome, simply as an extension of the story arc, to assist in re-settling the Brettish survivors in the Skerries.)
Top May I first express my upmost sorrow at the horrific tragedy that has unfolded on the Home Islands. Nova England has long been a friend to your forbearers the Britannic Empire, and the Britannic people that inhabited the land under the governance of the Brettish Isles.

In support of our Britannic brethren we would like to offer aid and appropriate assistance in any way we can. As such Port Neil will be made available for refugee ships from the Home Islands to either refuel or remain to rest and recuperate. In addition to this the faedertellus can also offer security assistance to protect and bolster your remaining security personnel on the Skerries.

NovaMicras hereby announces it will relocate to somewhere else temporarily, most likely, then investigate relocating to "Coastalis."
Top

Once our issue with Shireroth is resolved. We will be happy to help!
"My name's Jeff"
Top

The Imperial Republic presents its sincere condolences on this tragic event.

Our Allies shall not be forgotten in this dire time of need. Both Jingdao and the Isles are connected through the royal marriage between Second Princess Yuling and your prince. The Heavenly Court shall therefore allow the Brettish refugees to move to the island of Montauk. At the same time, we shall send in forces to help the locals who're still suffering.

We hope that the vile Shirerithians will leave the isles and the ships which bring the refugees to Montauk alone. Even in wartime, we should expect some dignity from our enemies.
Zhang San
Diwang of the Jingdaoese Empire
Top

The Brettish government sends its most heartfelt thanks to those who have offered us assistance, particularly Nova England, for use of Port Neil, and Jingdao, for allowing re-settlement at Montauk.

What remains of the Brettish Royal Navy is being rallied under Admiral Wellesley. Queen Alexis has charged him with gathering the remaining navy together in a large flotilla to offer protection to civilian vessels fleeing the Isles. The flotilla will provide escort to civilians making their way to re-settlement and aid centers nearby, such as Port Neil and Port Goose. From these ports a smaller battalion of destroyers will escort refugee ships to temporary re-settlement camps in the Skerries and on Montauk.

Given the Letter of Marque issued by Shireroth, we welcome any friendly naval assistance in protecting our civilian naval vessels from harm.
Top

(OOC: This was totally meant to be posted yesterday. Way to keep on schedule, Hālian. You fucking rock.)

Palace of the Golden Phoenix
20 Kaminadzuki 754

Her Majesty the Queen and His Majesty the King extend their deepest condolences to the scores of myriads(1) lost in the cataclysmic volcanic eruptions in the Brettish Isles, and to their family, friends, and loved ones.

We authorize and order by these presents Our Government to contribute a minimum of two thousand ōban(2) in hard currency to the Brettish relief efforts, as well as whatever supplies it deems necessary and expedient, including, but not limited to, blankets, hand-cranked flashlights & radios, cots, tents, sleeping bags, non-perishable civilian food, excess military rations, and other equipment of the type issued to Our nation's military as survival gear.

Additionally, Our Government shall arrange for the intake at Shimogawa of up to ten thousand refugees from the Brettish Isles, and for their processing and resettlement on Niijima, in mainland Hoenn, or elsewhere, as necessary. 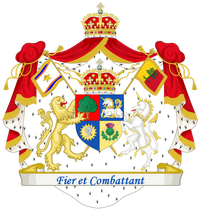 ZALAE -- Her Majesty the Queen, along with all of the people of the Kingdom of the Union of Caputia, wishes to extend its most sincere condolences and sympathy to the Kingdom of Brettania after the devastation from the volcanic eruption of the Caldera volcano.

As a nation that has experienced its fair share of tragedy and devastation recently, Our Home Office has determined that a special temporary immigration status will be given to all refugees escaping the devastation in Brettania. These refugees will be resettled in Caputia and given the option to pursue a temporary residency status or full citizenship in Caputia.

In addition to an openness to receive and resettle Brettanian refugees without any statutory numeric limitation, Caputia stands ready to allow the Hammish Humanitarian Council to ship much needed emergency supplies such as medicine, food, clothes and tents according to the need of the Brettish people.