Blessings from the Church of the Holy Lance,

We have recently been contacted by a number of Florians who have heard their true calling to God and wish to join our congregation. At this time we would like to make an initial investigation into the establishment of two churches within major cities in Floria.

However we would like to note that having witnessed recent ethnic tensions in Floria, we are keen to assure the security of our priests and representatives. Therefore those traveling to Floria to undertake these investigations into properties, tax laws and visas will be escorted by Security Operatives from Colonial Executive.

Should you have any queries then please do not hesitate to contact us.

Ethbin Mercer
Guardian of the Lance

The Florian government promises the safety and security of these priests and any negative reactions will be removed immediately.
"My name's Jeff"
Top

Sermon at the Ruins.

St Joseph’s Church had remained a rubble strewn shell since the destruction of Northcliff during the War of Lost Brothers. Its parish had long moved on, leaving the ruined remains of the building as a reminder of all that had been lost. However years later, curious locals noticed activity within the wreckage. Armed guards that spoken in strange accents barred access to the site and refused to answer their questions. When they took their complaints to the police they were told to simply wait and stay calm.

Ten days after the appearance of outsiders, the cracked and damaged bells of the church clanged into life. Each gong sounding wounded and broken, however it called to the locals who began to flock towards the pockmarked steps of the church. At the head of the steps were more armed guards and a simple wooden dais, as the sound of the bells diminished the scorched oak doors of the church opened and a tall figure strode out towards the dais. Mutters began in the crowd as they observed his simple black clothing and his white collar but what marked him out differently to any holy man they had seen before was the burn scars covering a portion of his face. As the level of noise within the crowd began to increase in excited discussion the holy man raised his hands bringing the crowd to silence.

‘My name is Lance Bearer Mark Fyr and Floria shall be my ward. I stand here today to give the opening sermon for what shall be our first church here in this country in the name of Almighty God. I stand here before you to deliver the truth of God’s words and how you may best serve him. I stand here because you are survivors of destruction and violence, ready to be shaped by God.’ Began the holy man with passion, behind him unfurled a large banner that displayed the white cross of the Church of the Holy Lance emblazoned on a black shield, encircled by gold and astride a black spear.

The holy man gestured towards the banner as he continued. ‘God came to us and gave us his weapon and this is why we follow the mission that he gave unto us! Like a blacksmith he plunges us into the fires of hell and strikes at us thunderous hammer blows to shape us, to make us stronger! To become a tool of which he can truly use! You may think that you have witnessed disaster but what he prepares us for is far worse, far more destructive and if we are to rise again from the flames of Micras, we must prove that we are prepared! I today open this church to accept those willing to accept these trials and tribulations, who wish to understand the true word of God and his designs upon us. The Church of the Holy Lance shall guide you and give you the strength to rise from the ashes. The church behind me shall stand as an example of that, destroyed in the violent throngs of war we shall rebuild it greater and more glorious than before. And should it ever be destroyed again we will remake it again and again ever greater and stronger than before. We shall shoulder the fires of hell and the hammer blows of God because each of these makes us greater and stronger than before. There may be those that doubt these words but heed them not, I myself have faced these trials and emerged from the flames stronger.’

The holy man paused briefly before continuing. ‘When I was a young man living amongst the wreckage of the Faedertellus before its glorious rebirth, my family lived on a small farm. One night a group of thieves broke down the doors of our home, shot my father in cold blood before dragging my mother away into the darkness. They set fire to my home leaving me to burn in hellish fire, but as the flames began to lick at my face I felt something awaken within me. I stepped through the flames and took my father’s knife from his burning body and escaped the flames into the cool air of the night. As dawn broke I tracked the men back to their camp, finding my mother’s body strewn amongst discarded bottles of alcohol. The men hungover and sleeping did not notice me as I moved amongst them, skin blackened and blistered, clothes singed and bloodied, knife glistening and sharp. I gave no mercy to the men as I slaughtered them and as I left their lifeless bodies, afterwards maddened by pain and infection God showed me the path to an old priest who tended my wounds and recognised the strength that had erupted from me. I rose from the literal ashes of my home and the devastation of my family a stronger man, motivated and hardened so that I could undertake God’s work. Lastly let me finish my sermon with a brief prayer, a prayer that we call the Pledge since it is our Pledge that we give unto God to serve as his tool on Micras.’

The holy man cleared his throat before continuing.

‘Lord Almighty.
Blessed are we your faithful soldiers.
May our spears stay sharp and our shield walls unbreakable, as we defend your honour and truth. May our strength and dedication be unwavering, as we face the trials ahead.
May our martyrdom and selflessness be awe-inspiring, as we battle the daemons of this world. Forever we pledge our allegiance as your warriors on Micras.
Amen.’

The crowd that had remained silent for much of the sermon, said their Amens.

‘Now let me take my leave and begin the work of rebuilding this church, those that have paid heed to my words and wish to learn the truth may join me inside.’ With these final words the holy man walked back into the church, followed by half of the armed retinue that had stood guard during the sermon. The crowd erupted into quiet chatter as they processed the words that had been spoken to them. No one dared to be the first to climb the steps, until an old man whose body was wrought with the scars of conflict scaled the steps and strained as he picked up a piece of rubble which he slowly moved onto an existing heap. Within moments inspired by this selfless act people left the crowd as they began to help, some returned to their homes collecting spades, buckets and other tools whilst others collected the rubble removing it from the shell of the ruined church. The holy man watched with satisfaction as he directed the works alongside the stern face guards. 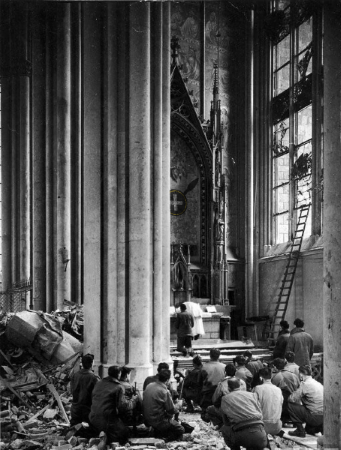 Cheers! Looking forward to expanded upon this as the Church sets root within Floria.